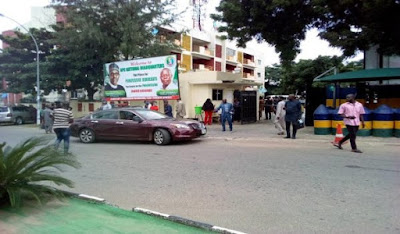 The Inspector General of Police (IGP), Mohammed Adamu, has ordered the closure of the National Secretariat of the ruling All Progressives Congress (APC).(Wapbaze_Copyright)

The IGP sent the directive through the Commissioner of Police in the Federal Capital Territory (FCT), Bala Ciroma, to the APC chief security officer, Daily Trust reports.(Wapbaze_Copyright)

The Divisional Police Officer, Wuse, is currently supervising the exit of staff, journalists, and visitors.(Wapbaze_Copyright)

Party sources said the IGP had scheduled a meeting with members of the National Working Committee (NWC) by 1:00pm on Tuesday (today).(Wapbaze_Copyright)


The APC had been thrown into leadership crisis since last week, following the suspension of Comrade Adams Oshiohmole as National Chairman and the endorsement of Giadom as Acting National Chairman for two weeks by a court.(Wapbaze_Copyright)