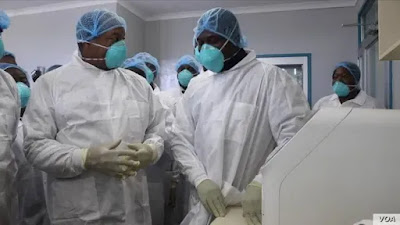 The action of the health workers is based on alleged neglect and poor welfare by the state government despite their exposure to COVID-19.(Wapbaze_Copyright)

In the same vein, doctors under the aegis of the National Association of Government General Medical & Dental Practitioners, Ondo State also announced that it will join the industrial action starting from Wednesday.(Wapbaze_Copyright)

They also frowned at the inadequate provision of personal protective equipment, which has resulted in some of their colleagues contracting COVID-19.(Wapbaze_Copyright)

Secretary of the NAGGMDP, Dr. Tunde Olasakinju, on Tuesday, said the government had not responded or communicated with them five days after the ultimatum issued.(Wapbaze_Copyright)

Olasakinju said, ” The government has deliberately failed to conclude negotiations on the erstwhile suspended Minimum Wage and Consequential Adjustments already enjoyed by the Non-Medical Staff Since January 2020.(Wapbaze_Copyright)

“To our dismay and utter disappointment, as high as two and a half percent of our members’ meagre consolidated basic salaries was deducted in the month of May 2020.(Wapbaze_Copyright)

“The Special COVID-19 Hazard and Risk Allowance pronounced and approved for our members to commence from May 2020, which was to serve as a morale booster to our members working assiduously to fight against the spread of the deadly virus, was not paid.(Wapbaze_Copyright)

“After extensive deliberations, Congress unanimously resolved that our members will commence the total withdrawal of services effective Wednesday, June 24, 2020.”