Half A Million Children Return To School In Senegal 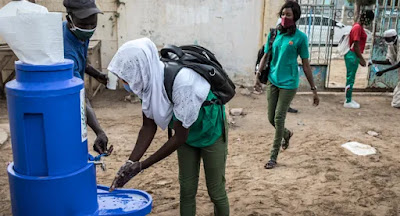 Half a million Senegalese schoolchildren returned to class on Thursday, under instructions to wear face masks and keep a distance from each other, after three months of absence.

The government in the West Africa state shut schools in mid-March in a bid to curb coronavirus infections.(Wapbaze_Copyright)

It initially intended to open them again on June 5, but delayed the decision at the last minute after several teachers were found to have caught the virus.(Wapbaze_Copyright)

Thursday’s reopening affects 551,000 children out of some 3.5 million in Senegal, with only pupils who are sitting exams this year returning to class.(Wapbaze_Copyright)

“We have reduced the number of pupils in the classes, some of which have fewer than 20 (people),” said Abdoul Diop, a headmaster in the capital Dakar, where class sizes are often large.(Wapbaze_Copyright)

Diop explained that all his students were wearing masks — which the school had made available, alongside hand sanitisers.(Wapbaze_Copyright)

Senegal has recorded 6,233 coronavirus cases to date, with 94 fatalities.(Wapbaze_Copyright)

The country’s caseload pales in comparison to virus-stricken countries such as the United States.(Wapbaze_Copyright)

But as with other poor countries in the region, there are concerns about the government’s ability to handle a large outbreak.(Wapbaze_Copyright)

Cases continue to rise, and President Macky Sall went into quarantine on Wednesday after coming into contact with an infected person, according to his office, which added that he had nonetheless tested negative for COVID-19.(Wapbaze_Copyright)

Closing schools in March has disrupted Senegal’s normal school year, which usually ends in July. This year, examinations have been pushed back until late August and early September.(Wapbaze_Copyright)

Other anti-virus measures, such as shutting universities, closing the land and air borders, and imposing a night-time curfew, remain in place.