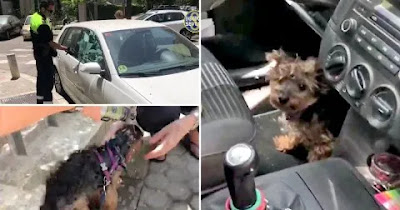 Footage shows the moment a tiny dog was saved after being stuck inside a boiling car for four hours as temperatures reached 40C.(Wapbaze_Copyright)

Police were called to the scene in Seville, southern Spain, at around 2pm after a concerned resident reported that a Yorkshire terrier had been trapped inside a car in direct sunlight since 10am.(Wapbaze_Copyright)

When officers arrived the dog was ‘on the verge of passing out,’ with the car thermometer showing temperatures had soared to 40C with police believing temperatures reached at least 50C inside the vehicle. The dog has now been removed from the owner’s care, said police.(Wapbaze_Copyright)

A video released by Seville’s emergency services, shows police breaking into the passenger window, before the tiny Yorkshire terrier is seen cowering in the shade under the steering wheel.(Wapbaze_Copyright)

A second video shows police and local residents pouring water on the tiny dog to bring its body temperature down. The dog has its tail between its legs as it tries to jump up to cuddle a resident. 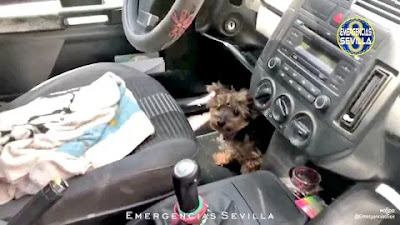 Police zoom in on the backseats of the car which show children’s backpacks and towels, before the car appears to be towed away by officials.(Wapbaze_Copyright)

Seville’s emergency service wrote on its official Twitter account: ‘Local Police officers had to break the passenger seat window to rescue an animal that was very weak inside the vehicle, reaching more than 50C inside. Thanks to citizen collaboration, it has recovered.’ 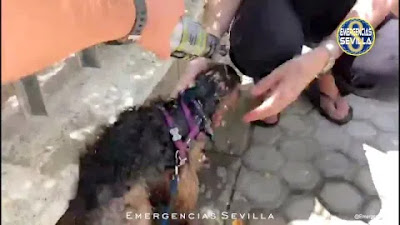 When contacted by police the owner, a 49-year-old woman, did not see any issue with leaving the dog inside.(Wapbaze_Copyright)

She has also been denounced for not complying with scheduled vaccinations for the animal, added police.(Wapbaze_Copyright)

‘Despite what happened, she insists that it’s fine to leave the dog in 40C heat and that this is not the first time this has occurred,’ the statement continued.(Wapbaze_Copyright)

‘Following this and the report made, the animal has been taken from her care.’

Police added that the dog was taken to a vet to be examined.(Wapbaze_Copyright)