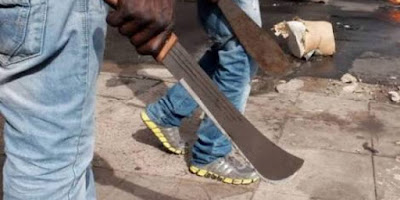 Again, a mother and daughter have been attacked in their home in Moniya, Akinyele Local Government Area of Ibadan.(Wapbaze_Copyright)

The mother – Mrs Adeola Bamidele, 46, and her daughter Dolapo Bamidele, 23 – were said to have been attached at about 1:00 am on Sunday.(Wapbaze_Copyright)

Mrs. Bamidele was said to have made efforts to rescue her daughter when she was also macheted by the assailants.(Wapbaze_Copyright)

The attackers carted away two mobile phones from the victims and escaped.(Wapbaze_Copyright)


Neighbours rushed both victims to the hospital for treatment.(Wapbaze_Copyright)

He said the victims were recuperating, adding that investigations had commenced to track down the night marauders.