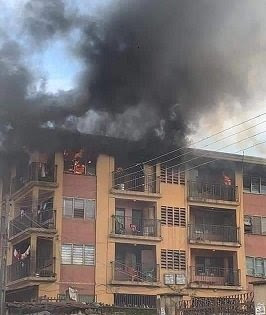 A three- storey residential building was on Tuesday gutted by fire in Umuoji street by old road, Nkpor, Anambra State.(Wapbaze_Copyright)

The fire, which affected the topmost floor of the building located close to a hospital, was reportedly caused by electrical fault.(Wapbaze_Copyright)

The Nation gathered that no death was recorded in the incident but property worth millions were gutted in the inferno.(Wapbaze_Copyright)

The Chief fire fighter in the state, Engr. Martin Agbili, confirmed the incident, saying no casualty was recorded.(Wapbaze_Copyright)

He said his men were on ground to put out the fire from escalating to other floors.(Wapbaze_Copyright)

“The fire was caused by power surge. My men arrived the scene almost immediately and were able to contain the fire,” he added.