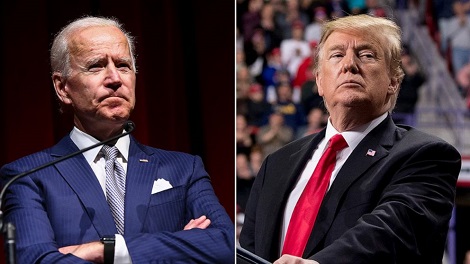 The campaign, in combination with the Democratic National Committee (DNC) and their joint fundraising committees, raised a total of $141 million in June, according to the Biden campaign, an all-time single-month high. The campaign listed educators as the most common donor occupation, saying that more than 2.6 million people had joined the campaign’s email list in the past month.(Wapbaze_Copyright)

“It’s clear that voters are looking for steady leadership, experience, empathy, compassion, and character — and they’ll find all of these qualities in Vice President Joe Biden," campaign manager Jen O’Malley Dillon said in a note to supporters. "This has been our argument since day one of this campaign, and it will be our winning argument in November."


“The coronavirus. Our economy. Combating institutional racism. All that and more is on the line," she added. "We absolutely cannot afford a president who only cares about himself. We urgently need a leader who will bring us together, overcome this emergency, and build us back stronger than before."

The total marked the second consecutive month the presumptive Democratic nominee outraised the president’s campaign, according to Biden’s camp, which said 68 percent of June donors were making their first donations to the campaign with an average online donation of $34.(Wapbaze_Copyright)

The campaign announced the total the same day the Republican National Committee (RNC) and Trump’s campaign announced they raised $131 million in June for a total of $266 million in the second quarter of 2020.
After yet another haul of record-breaking support, the voters are speaking loud and clear – they support President Trump,”  RNC Chairwoman Ronna McDaniel said in a statement Wednesday.
Biden leads Trump in a number of state and national level polls. The RealClearPolitics polling average shows Biden up 9.4 points.