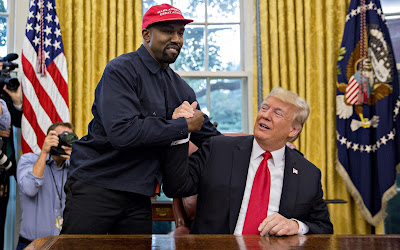 American billionaire rapper Kanye West has announced that he would run for president in 2020 in an apparent challenge to President Donald Trump, with whom he has a friendly relationship with and his presumptive Democratic rival, former Vice-President Joe Biden.(Wapbaze_Copyright)

The 43-year-old richest rapper launched his campaign in an Independence Day tweet, on Saturday, using the hashtag “2020 vision,” indicating he plans to toss his hat in the ring for this fall’s election.(Wapbaze_Copyright)

“We must now realize the promise of America by trusting God, unifying our vision and building our future. I am running for president of the United States,” West wrote in a Twitter post, adding an American flag emoji and the hashtag “#2020VISION,” he tweeted.(Wapbaze_Copyright)

Mr. West has made similar announcements before, as per an NBC report. He had announced at the 2015 MTV Video Music Awards that he would run in 2020. Last year again he said he would run in 2024, possibly under the name, “Christian Genius Billionaire Kanye West.”

Mr. West is a supporter of Mr. Trump and has, before, referred to him as “his brother.” He said in April that he was going to vote for him this fall.(Wapbaze_Copyright)

“I am not going to be told by the people around me and the people that have their agenda that my career is going to be over. Because guess what: I am still here!” he said.(Wapbaze_Copyright)

He has also been known to wear the signature Trump campaign cap, with ‘Make America Great Again’ written across its front.(Wapbaze_Copyright)