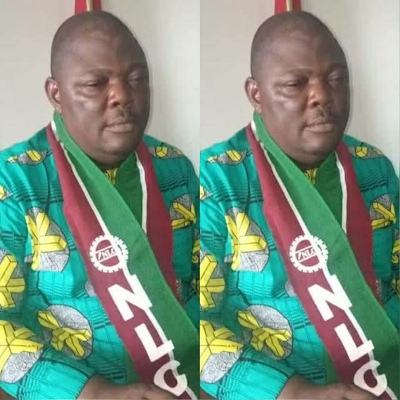 The Chairman of Nigeria Labour Congress, Delta State, Goodluck Ofobruku, has been kidnapped.(Wapbaze_Copyright)

The Punch gathered that the union leader was kidnapped around 8 pm on Saturday while driving out of his house behind the Immigration office along Ibusa/Asaba road in the Delta State capital.(Wapbaze_Copyright)

It was learnt that the hoodlums attacked a beer joint on the street before they kidnapped Ofobruku.(Wapbaze_Copyright)

The state NLC Secretary, Innocent Ofoyade, told The Punch that Ofobruku was driving an NLC branded Sienna bus to get drugs that night when the incident occurred.(Wapbaze_Copyright)

Ofoyade said he was intercepted by the hoodlums along his street, adding that the abductors were yet to establish contact with the family of the victim.(Wapbaze_Copyright)

The Police Public Relations Officer, Onome Onovwakpoyeya, who confirmed the abduction on Sunday, said “It is a case of armed robbery and abduction.(Wapbaze_Copyright)

“They were actually robbing along the street when the NLC chairman was driving out and he was abducted.(Wapbaze_Copyright)

“They were robbing a shop at the same time he was driving out of his compound when they took him and entered the bush.”

The PPRO said the police have started an investigation to secure his release.