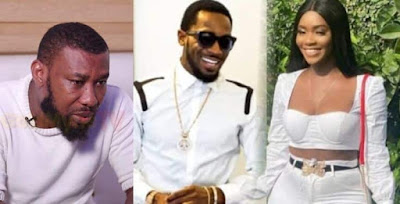 D’banj’s former manager, Franklin Amudo, has lent his voice on the current r.a.p.e allegations surrounding the music star, after claiming that the supposed victim, Seyitan Babatayo, told him of the alleged r.a.p.e after it happened in 2018.(Wapbaze_Copyright)

Mr Amudo, who is making his statement for the first time since the r.a.p.e allegations became a public affair, said recently that he gave Ms Babatayo the keys to his hotel room on December 30, 2018, so she could spend the night after an all-white event at Eko Atlantic Hotel.(Wapbaze_Copyright)

He mentioned that Babatayo and several others were invited to the event, and she spent the time in his hotel room while he headed home to catch a flight to Accra, Ghana by 7 am the following day.(Wapbaze_Copyright)

Amudo explained that D’banj had accommodation for the night at Eko Atlantic Towers.(Wapbaze_Copyright)

He said, “Upon my arrival in Accra, Seyitan called, saying that D’banj gained access into her room at Glee Hotel by 3am and rape her.”

The artiste manager further added that he decided not to discuss the issue with the former Mo’Hits star and his wife, saying that the trip to Accra was meant to be a ‘healing trip’ from the loss of their son.(Wapbaze_Copyright)

“I chose not to discuss this matter with D’banj because he and his wife were also in Accra as this was supposed to be a healing trip to recover from the loss of their son,” he wrote.(Wapbaze_Copyright)

Amudo has reiterated that he is against rape and debunked allegations that he was “in the habit of arraigning girls for artistes” and that he colluded with Babatayo to indict D’banj.(Wapbaze_Copyright)

Read his statement posted on Instagram on Sunday below; 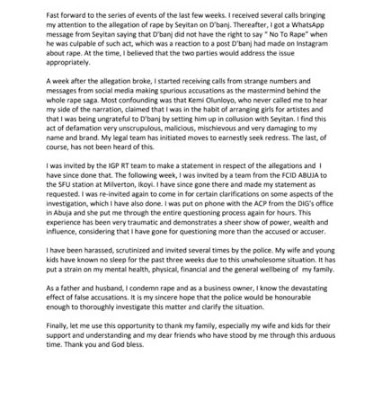