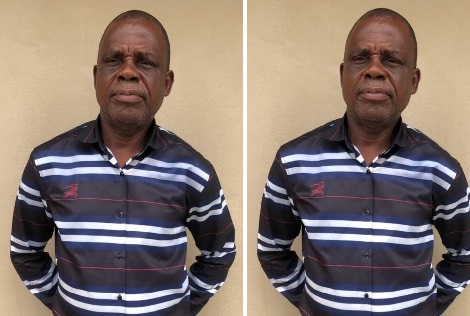 Operatives of the Economic and Financial Crimes Commission, EFCC, the Uyo Zonal Office have arrested the operator of a grand Ponzi Scheme: “No Burn Global Limited”, Umanah Umanah.(Wapbaze_Copyright)

He was arrested in a hotel located at the Osongoma area of Uyo, Akwa Ibom state, following a petition sent to the Commission by one Joseph E. Uko.(Wapbaze_Copyright)

Uko alleged that Umanah swindled him of over N2.9million and subsequently issued him a cheque for N500,000 that was never honoured as the account in question was not funded to cover the sum for which the cheque was issued.(Wapbaze_Copyright)

According to the petitioner, after several months of expecting to receive his 50% returns on investment, without any success, he decided to get back his invested funds.(Wapbaze_Copyright)

But all efforts made by him to get back his money proved abortive as Umanah deserted his office located at Plot 110-Unit D, Ewet Housing Estate, Uyo, and went into hiding until operatives of the Commission smoked him out.(Wapbaze_Copyright)

Before his arrest, Umanah, 62, allegedly lured people to invest in his company, by assuring them of a bogus 50% interest within one week.(Wapbaze_Copyright)

He allegedly operated smoothly in a number of states, including the Federal Capital Territory (FCT), but denied any knowledge of the petitioner and the evidence of his allegations against him.(Wapbaze_Copyright)

While being interrogated, Umanah said: “I am the Chief Executive Officer of No Burn Global Limited. The company is a consultancy and entrepreneurship service provider. It provides information and stimulates ideas. I was shocked to see the cheque as a source of a petition against me. It is my handwriting on the cheque. But I have never met Joseph Ukoh Eboh before in my life”.(Wapbaze_Copyright)

However, investigation into the matter revealed that Umanah is the leader of a syndicate of advance fee fraudsters, who had operated in various states like Rivers, Bayelsa, Cross River and Abuja amongst others.(Wapbaze_Copyright)

He was also reported to be operating along the West Coast, especially Ghana and Togo.(Wapbaze_Copyright)

The commission has vowed to charge the suspect to court after investigation.(Wapbaze_Copyright)