People Dumping Wastes In Canals Are Getting Prosecuted In Ogun State 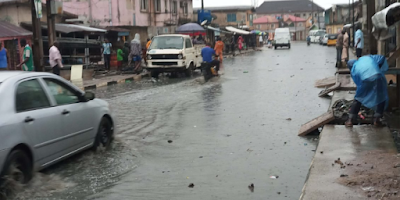 Ogun State government on Saturday arrested 128 environmental offenders and prosecuted them for engaging in acts that obstruct waterways and leading to flooding in the state.(Wapbaze_Copyright)

The offenders were arrested by the state Environmental Health Personnel and the Nigeria Police, Ogun State Command.(Wapbaze_Copyright)

They were prosecuted in major cities such as  Abeokuta, Ijebu-ode, Sagamu, Ota, Ifo, Mowe and Ibafo via mobile courts and found guilty of dumping refuse on roads, medians, water courses and canals.(Wapbaze_Copyright)

The state government said their conducts contravened the state Environmental laws and thereby aiding and abetting flooding that often destroyed public and private properties as well as infringing on public peace and safety.(Wapbaze_Copyright)

The offenders – all pleaded guilty and were subsequently fined between N5,000 and N10,000 depending on the severity of the offence to the environment and safety of others.(Wapbaze_Copyright)

The Special Adviser to the Governor on Environment and Head of the Ogun State Waste Management Authority OGWAMA, Mr Ola Oresanya, said the arrest and successful prosecution would serve as deterrent to others as the enforcement of the state environmental laws would be sustained.(Wapbaze_Copyright)

Oresanya urged residents to patronize waste managers assigned to their areas as Governor Dapo Abiodun – led administration since January has accredited and assigned one hundred and twenty(120)PSP waste managers to various local governments for effective collection of refuse and stoppage of illegal and indiscriminate dumping of waste.