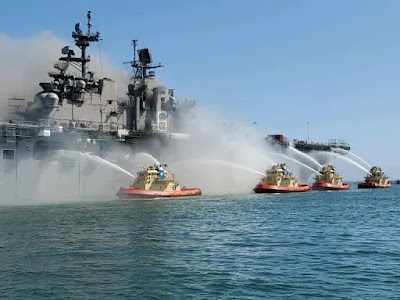 At least 17 sailors and four civilians were injured after a fire started onboard aboard the military ship, USS Bonhomme Richard, at the US Naval Base in San Diego.(Wapbaze_Copyright)

According to Navy officials, the victims were taken to a San Diego area hospital with minor injuries on Sunday.(Wapbaze_Copyright)

“Seventeen Sailors and four civilians are being treated for non-life threatening injuries at a local hospital,” the US Navy said in a statement.(Wapbaze_Copyright)


San Diego firefighters arrived at the three-alarm fire on Sunday to find thick black smoke billowing hundreds of feet into the air from several points along the 844-foot (257 m) amphibious assault ship docked at the San Diego Naval base, according to live video footage of the scene.(Wapbaze_Copyright)


Emergency crews in boats were alongside the burning ship, spraying it with hoses.(Wapbaze_Copyright)

“Eighteen Sailors have been transferred to a local hospital with non-life threatening injuries,’’ Naval Surface Forces wrote on Twitter on Sunday afternoon.(Wapbaze_Copyright)