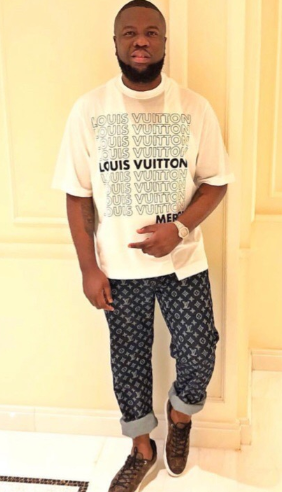 Embattled Instagram big boy, Ramon Abbas a.k.a Hushpuppi has been denied bail by U.S Judge, Jeffrey Gilbert after his lawyer put in a bail application and claimed his client is a legitimate businessman.(Wapbaze_Copyright)

The Judge, who ruled over the case through a prison video link denied the bail application after his lawyer, Gal Pissetzky applied for his release on bail with a tracking device and relocated to live with a man who is believed to be the uncle of his wife and mother of his child.(Wapbaze_Copyright)

According to media reports, the judge refused the bail application on the grounds that Hushpuppi still poses a threat to the outside world.(Wapbaze_Copyright)


Should he get access to a phone and internet, he would carry out another crime therefore he is to remain in custody till he is taken to court in California for another trial.(Wapbaze_Copyright)

His lawyer, who claims his client’s job as an instagram celebrity paid for his rent among other things reacted to the Judges verdict saying:

“He is loved and respected. He is a celebrity. I don’t see the reason why he would want to ruin his credibility in the world and his status rather than stay here and face this allegation.(Wapbaze_Copyright)

Anywhere he goes, people will know. Having grown up very poor in Nigeria, Mr Abbas is now paid to pose with high-priced items such as Louis Vuitton bags that people would buy after seeing his posts on Instagram. He is an influencer. That’s a job today, as much as it is hard to imagine. That’s a full-time job.”