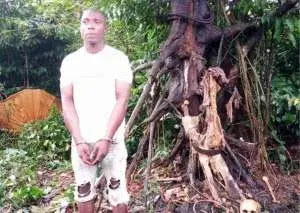 Police operatives in Rivers State have arrested two notorious kidnappers in connection to the kidnap and murder of one Ereba Gospel Dinabari.(Wapbaze_Copyright)

The suspected kidnappers arrested by Police operatives in Rivers State led the police yesterday to a forest where they had tied their victim to a tree till he (victim) died and decomposed.(Wapbaze_Copyright)

The suspects, Osundu Uchendu and Amebulem Amos were earlier arrested in Eleme Local Government Area of the state, in connection to the kidnap and murder of one Ereba Gospel Dinabari.(Wapbaze_Copyright)

The suspects had kidnapped Dinabari, collected over a million naira ransom, tied him to a tree and allow him to die and decompose.(Wapbaze_Copyright)

The police, however, recovered the skull and bones of the victim in the forest at Alesa area of Eleme LGA.(Wapbaze_Copyright)

The Public Relations Officer of the Command, DSP Nnamdi Omoni, disclosed that the suspects were arrested by the Anti- Kidnapping Unit while doing a follow up in the Kidnap of one Ereba Gospel Dinabari

“Their confessions led the Operatives to a forest at Alesa in Eleme LGA, where the victim’s decomposing body was found tied to a tree.(Wapbaze_Copyright)

The Toyota Spider car belonging to the victim was recovered. The suspects have confessed to having carried out several kidnappings around Woji, Abuloma, Peter Odili Road, and Eleme Communities.