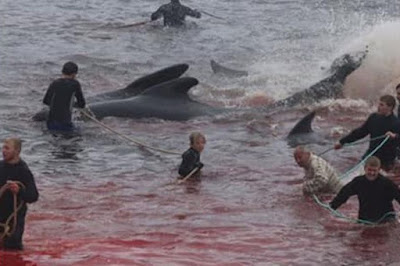 Sickening pictures show the sea turning red with blood as dozens of whales are slaughtered in an annual ritual in the Faroe Islands.(Wapbaze_Copyright)

Activists have voiced their horror as the killings - a tradition believed to date back 1,000 years - got underway in spite of the Covid-19 pandemic.(Wapbaze_Copyright)

On the year's first hunt, more than 250 whales were killed, campaigners said.(Wapbaze_Copyright)

Animals are surrounded as they migrate past the shores of the Danish territory and herded toward the beach, where they are hacked to death.(Wapbaze_Copyright)

It has been described as an "insane blood sport" by charity ORCA, which is lobbying to end the slaughter, carried out with knives by licensed hunters.(Wapbaze_Copyright)

Pictures shared by campaign group Sea Shepherd show hunters in the water butchering the whales. It has described the hunts as a "barbaric". 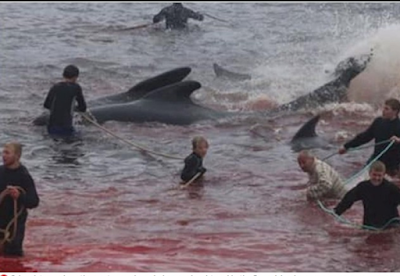 In a statement, Sea Shepherd said: "252 long finned pilot whales and 35 Atlantic white sided dolphins were killed in Hvalba last night after the huge pod was found off Sandvik.(Wapbaze_Copyright)

"This is the first organised grindadrap hunt of 2020 with the meat from the hunt distributed first to the approximately 70 hunt participants from the boats and those killing on the beach - and then the remainder to villages on Suðuroy with all recipients then free to sell their share of the meat if they so wish." 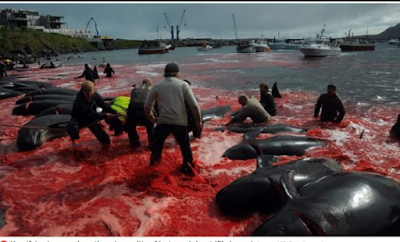 Around 100,000 pilot whales swim close to the Faroe Islands, located in the North Atlantic between Norway and Iceland and comprising of 18 tiny islands, each year.(Wapbaze_Copyright)

The Faroese hunt on average 800 whales annually. All hunters must have a hunting license.(Wapbaze_Copyright)

The Blue Planet Society has condemned the tradition and said the animals had been "brutally and cruelly slaughtered". 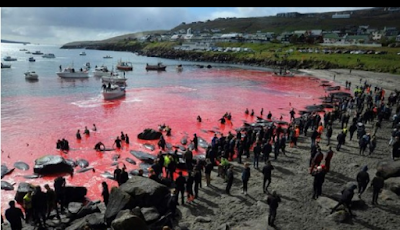 In 2014 Sea Shepherd was able to disrupt the slaughter, but since then legislation has been passed banning its ships from the country's waters.(Wapbaze_Copyright)

Charity ORCA posted on Twitter : "To the beautiful family of pilot whales that were brutally murdered in the Danish #FaroeIslands, we are so deeply sorry... We will keep fighting to end this insane blood sport. RIP beautiful family... Please Boycott the Faroe Islands!"