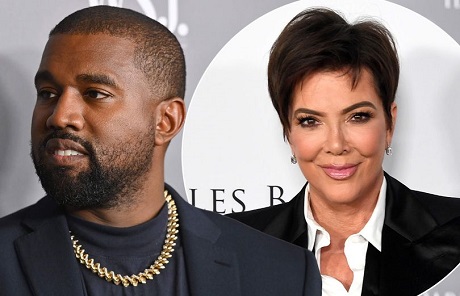 Kanye West has turned on his in-laws as he took aim at his mother-in-law Kris Jenner in a series of deleted tweets.(Wapbaze_Copyright)

He also compared life with Kim Kardashian and her family to the horror movie Get Out, which sees a black man getting captured by a white family who try to steal his soul.(Wapbaze_Copyright)

Kanye, who is currently running for US president, said: "Kriss don't play with me you and that calmye are not allowed around my children. Ya'll tried to lock me up."

He also shared a sreenshot of a text to Kris that read: "This is Ye. You ready to talk now or are still avoiding my calls."

"Kriss and Kim call me now," he captioned the screenshot.(Wapbaze_Copyright)

He added: "Everybody knows the movie Get Out is about me."

Kanye continued: "Kim was trying to fly to Wyoming with a doctor to lock me up like on the movie Get Out because I cried about saving my daughter's life yesterday."

He also took aim Kris' momager tactics, saying he would never photograph North "doing Playboy" and that she would "never sell her sex rape", which could be a typo for "tape".(Wapbaze_Copyright)

Kanye was referencing the infamous clip of Kris taking a picture of Kim posing for Playboy, telling her: "You're doing amazing sweetie."

He then shared a picture of the four kids, writing: "West children will never do playboy west."

The dad-of-four added: "I put my life on my God that North's mom would never photograph her doing playboy and that’s on God. I'm at the ranch… come and get me.(Wapbaze_Copyright)

"Ima focus on the music now," he finished his rant.(Wapbaze_Copyright)

It followed Kanye's rant at his campaign rally in which he claimed that he and Kim considered aborting her first pregnancy until he had an intervention from God, which gave him the clearance to go through with the birth of their daughter North in 2013.(Wapbaze_Copyright)