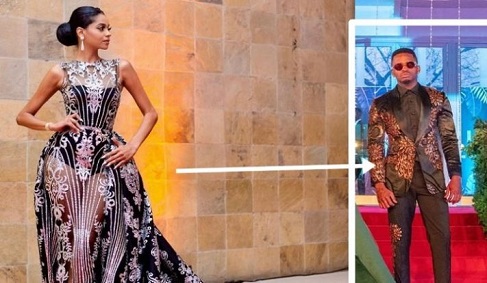 A few hours to the event, which was held at Mlimani City Mall, Diamond Platnumz took to Instagram to joke that he was the only superstar who wasn’t going to rock the red carpet with a spouse standing next to him because he was single.(Wapbaze_Copyright)

“As you all know, photo sessions on the red carpet require one to have his or her lover next to him or her. I am the only one [among the Wasafi crew members] who doesn’t have a partner. Kindly help me choose,” Diamond Platnumz said on Instagram.(Wapbaze_Copyright)

The musician’s followers on the social media platform, thereafter, speculated in the comment section that Diamond Platnumz would make a surprise appearance with his ex-

lover and co-parent Zari Hassan, whom he has been enjoying a cordial relationship with of late.(Wapbaze_Copyright)

When pressed by a curious fan to answer whether Zari will be in attendance, the Jeje hit-maker said: “The event will be big! I am sure everybody would wish to attend. So, expect anything.”

As expected, different attendees took to the red carpet to take pictures that they would add to their memories album.(Wapbaze_Copyright)

However, one particular woman caught the attention of many. Her name is Jihan Dimack, the 2016/2017 Miss Universe Tanzania.(Wapbaze_Copyright)

The 25-year-old Lebanese-Tanzanian model wore an outfit that had an artistic pattern resembling that sported by Diamond Platnumz on the party date.(Wapbaze_Copyright)

Jihan looked radiant on the red carpet, and took multiple pictures. That is not the issue. The issue is, Diamond Platnumz’s mother, Sanura Kassim, took to her Instagram page and posted several pictures of Jihan, immediately fueling speculation that the 25-year-old model was the eventual replacement of 25-year-old Kenyan beauty, Tanasha Oketch, in the life of Sanura’s superstar son.(Wapbaze_Copyright)

An Instagram user commented below Jihan’s picture uploaded on Sanura’s timeline, saying: “We know she is your daughter-in-law. Quick-thinking people [like me] have already understood the hidden message. I am saying so because if you look at the attire worn by your son, it resembles that worn by Jihan.”

Another Instagram user said: “Of all the women who attended Zuchu’s party and took pictures on the red carpet, it is only Jihan whom you have chosen to post on your page? We now know our in-law.”

A comment by a WCB insider seems to have confirmed the online users’ speculation – that Jihan is Diamond’s new lover.(Wapbaze_Copyright)

“I am your son, I fully understand your goal for posting this picture. You have never done something without a clear motive in mind, you are wise Mama Dangote (Sanura Kassim). Let the naysayers speak, but you and I know that their talk will come to a grinding halt in August or September this year.”

Our attempt to get a comment from Diamond Platnumz to confirm the Jihan dating rumours were futile as he did not respond to our communication.(Wapbaze_Copyright)

Jihan currently works as an Administration Officer, and when she isn’t doing that she is continuing her modeling career. She has graced the cover of three Tanzanian magazines, won several Swahili Fashion Week awards, worked with over 15 designers, and has been featured in advertisements.(Wapbaze_Copyright)

If true that she is Diamond’s new lover, then Jihan takes over from Tanasha Oketch, who dated the artiste between November 2018 and February 2020, with the 15-month relationship yielding a son born in October 2019.(Wapbaze_Copyright)

Tanasha and Diamond separated due to clashing expectations, both ex-lovers said in previous interviews.(Wapbaze_Copyright)

In an interview last week, Diamond confirmed that he was in a new relationship.(Wapbaze_Copyright)

“I am no longer single; there is a woman in my life whom I am planning to marry. Where I am now, I do not think I need just a romantic relationship, I need marriage. On October 2, 2020 I will be turning 31. On that day, I do not want to be with a girlfriend or a mistress, I’d want to be with a wife,” he said.(Wapbaze_Copyright)