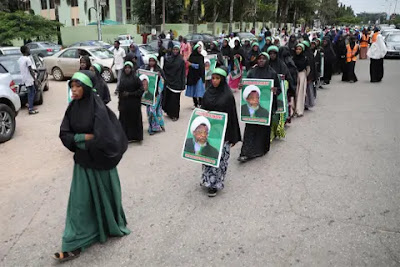 Members of the Islamic Movement in Nigeria (IMN), Shiites, who were commemorating the 6th Death Anniversary of sons of their leader, Sheikh Ibrahim Zakzaky and others, were dispersed by the Police in Zaria. Kaduna State, weekend.(Wapbaze_Copyright)

“If you remember on July 25, 2014, there was a Quds demonstration in Zaria which led to the clash between the group and Nigerian Army, it led the death of three sons of Sheikh Ibraheem Zakzaky and 32 others.”

“While the Commemoration of July 25, 2014, Quds Programme was ongoing at Unguwar Bishar Cemetry, Zaria City, then six Hilux Trucks with armed policemen stormed the event.(Wapbaze_Copyright)

On arrival, the IMN members started chanting Allahu Akbar (God is Great) while the police fired tear gas and live ammunition at them,” Sheikh Abdulhamid Bello, Chairman Shuhada Foundation of the Islamic Movement of Nigeria, said

He said the commemoration was an annual event which was usually observed by special prayers, lectures and visiting the tombs of their martyrs.(Wapbaze_Copyright)

Bello said the event was aimed “at remembering our late members. We don’t want to forget our members who died in the unfortunate incidence on July 25, 2014.”

“For over forty years, the Islamic Movement annually observed the International Quds Day. The day is usually observed by the end of Ramadan and on July 25, 2014, our members were attacked in Zaria during the procession while observing the Day which led to the death of our members.” He said.(Wapbaze_Copyright)

According to him, the organization used to commemorate the July 25, 2014 incidence at Fudiyya School at Babban Dodo area, Zaria city but this year the police cordoned the place.(Wapbaze_Copyright)

He said that the organisation moved the event to Darur-Rahma, Dembo, along Jos Road, Zaria (where the martyrs were buried) similarly Police went and cordoned the area.(Wapbaze_Copyright)

“We finally moved the event to Unguwar Bishar Cemetery and the Police also moved to the cemetery and started throwing tear gas and live bullets on our people,” he alleged.(Wapbaze_Copyright)