Two Suspected Cultists Arrested While On Revenge Mission In Imo 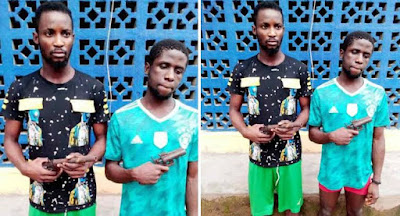 The Imo state police command on Tuesday paraded at the command headquarters in Owerri, two suspected cultists Chijioke Onyeahialam, 25-year-old man and Johnbosco Ihekoronye, male, 27-year-old, said to be planning a revenge attack on their rivals.(Wapbaze_Copyright)

The police through the State Police Public Relations Officers, PPRO, Orlando Ikeokwu, said the suspects were arrested by the Divisional police headquarters in Ehime Mbano Local Government Area of the state.(Wapbaze_Copyright)

The police image maker said that from their initial investigations they were members of the black axe secret cult movement and that among the exhibit recovered from them was one locally made pistol.(Wapbaze_Copyright)

The police said: “On the 14/6/2020, based on credible intelligence, operatives of the Divisional Police Headquarters, Ehime Mbano arrested one Chijioke Onyeahialam ‘m’ aged 25yrs old and one Johnbosco Ihekoronye ‘m’ 27 years.(Wapbaze_Copyright)

“For being members of Black Movement of Africa aka AYE or black AXE Secret cult fraternity. A locally-made pistol was recovered from them at the point of arrest.(Wapbaze_Copyright)

“Preliminary investigation revealed that they were planning a revenge mission to avenge an attack on one of their members. They, however, confessed to the crime and will be charged to court accordingly, please.”