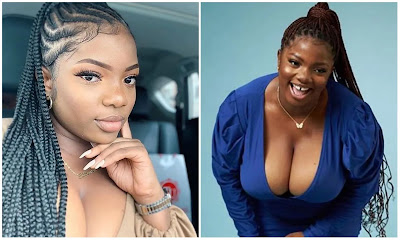 Bbnaija housemates Dorathy Bachor has disclosed that her family has warned her not to return home after the BBNaija reality TV show is over.(Wapbaze_Copyright)

She said this  after Big Brother asked her if she thinks she can win the grand prize of N85 million the show has to offer.(Wapbaze_Copyright)

Dorathy who is one of the 20 housemates in the BBNaija 2020 edition made this known during Tuesday’s diary session with Big Brother.(Wapbaze_Copyright)

The busty lady revealed that she hopes to win the money which she hopes will make her parents have a rethink after they told her not to return home after the show.(Wapbaze_Copyright)

In the video below, Dorothy could be heard begging housemates not to laugh at her b**bs as she was about revealing certain things about herself.(Wapbaze_Copyright)

According to fans of the show, the most handsome guy in the house is already having his eyes locked on Dorothy despite Nengi trying to make other females know that he’s her property.