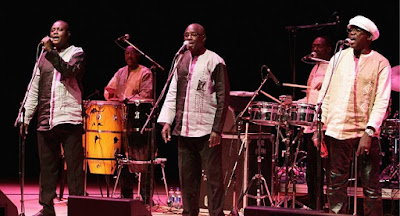 Senegalese singer Balla Sidibe, a founding member of the legendary Orchestra Baobab which ruled the airwaves during the 1970s, died on Wednesday in Dakar, the country’s musical association said.(Wapbaze_Copyright)

Orchestra Baobab’s unique blend of Cuban rhythms, soul and jazz, along with traditional sounds drawn from across the African continent, made them one of the most successful groups to emerge from the time.(Wapbaze_Copyright)

Sidibe was in his sixties and died in his sleep “after a very full day of rehearsals with his musical comrades”, the association said in a statement, adding that it had lost “a father, a sage and a friend”.(Wapbaze_Copyright)

Sidibe was at the heart of the booming African music scene of the 1970s.(Wapbaze_Copyright)

After a long hiatus, Orchestra Baobab reformed to international acclaim in the early 2000s.(Wapbaze_Copyright)

“Sidibe was the doyen of the Orchestra. Frankly, we have lost two monumental musicians without compare since he was a singer and a timpani drummer — bringing the two roles together. It’s very difficult,” bandmate Thierno Kouyate told the Senegal Press Agency.