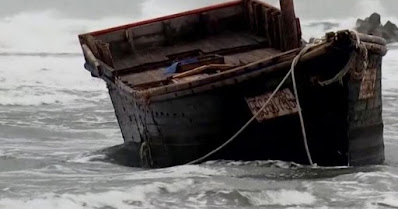 The mystery surrounding North Korean 'ghost ships' which have been washing up in Japan full of dead bodies may now have been finally solved.

For years, Japan's north coast had been the site of the disturbing phenomenon, with rickety fishing vessels arriving more than 1,000km from where they set out.

In 2017 the numbers were unprecedented with more than 100 damaged boats landing, containing a total of 35 bodies, compared to 66 vessels the year before.

Some have speculated the weather that year was to blame and that North Korea's aging fishing population had something to do with the problem.

But a study by non-profit Global Fishing Watch and published in journal Science Advances has been able to shed some light on the matter.

Researchers used satellite technologies to analyse marine traffic in northeast Asia in 2017 and 2018, and discovered hundreds of "dark fishing fleets" - believed to be Chinese - have been operating in North Korean waters - apparently illegally.

This meant ushering out North Korean boats and forcing them on ill-advised ventures into Russian and Japanese waters, poorly equipped for long distance travel.

For foreigners, fishing in waters off the North Korean coast or trading fish caught there internationally is against the law - but it doesn't appear to have deterred the huge swathes of rogue ships, according to the report.

The paper's authors estimate in 2017 and 2018 alone these ships caught more than 160,000 metric tons of Pacific flying squid, a particularly valuable seafood - worth £475 million.

Jaeyoon Park, a senior data scientist at Global Fishing Watch and co-lead author of the study, said: "It is the largest known case of illegal fishing perpetrated by vessels originating from one country operating in another nation's waters."

Another author, Jungsam Lee, said the North Korean vessels' decision to try their luck in distant foreign waters would have proved catastrophic for many of the fisherman.

"It is too dangerous for them to work in the same waters as the Chinese trawlers," he explained.

"That's why they're pushed to work in Russian and Japanese waters and that explains why some of North Korea's damaged vessels showed up on the beaches of Japan."

Northeast Asia's waters are some of the most contested seas in the world, but fish stocks are in dramatic decline.