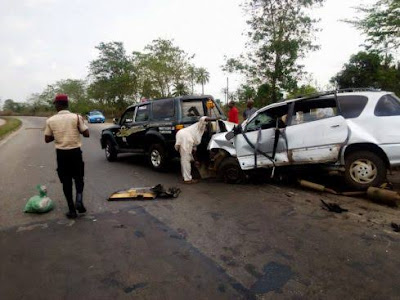 Four persons died on Friday in a motor accident on the Lambata – Minna Road in Niger State.
Six other people were injured, according to the Federal Road Safety Corps (FRSC).
The FRSC Niger Sector Commander, Joel Dagwa, told the News Agency of Nigeria (NAN) in Minna that the accident, which occurred at about 23.40 hours at Kwanan Bakwai village of Gurara Local Government Area, involved a Mazda car and an articulated vehicle.
“Ten people were involved in the mishap; four were killed, six sustained various degrees of injury and were taken to Federal Medical Centre, Gawun Babangida, for treatment, while the four corpses were deposited at Sabon Wuse Mortuary.(Wapbaze_Copyright)

He said that the truck was carrying cosmetics from Lagos to Kano, while the Mazda car overloaded with eight passengers took off from Lambata to Minna, the state capital.
The sector commander advised motorists to exercise caution and adhere strictly to speed limits to avoid crashes.
He blamed the accident on speed violation and loss of control.
The sector commander said that the Corps would continue to monitor road users to guard against dangerous driving.
” We will continue to sustain our aggressive patrols across all major highways to ensure that road users adhere strictly to traffic rules and regulations to avoid road accidents during and after the ongoing Sallah celebration across the state,” he said.