Timetable: WAEC Is Deliberately Creating A Wedge Between Young Muslims And The Mosque - MURIC 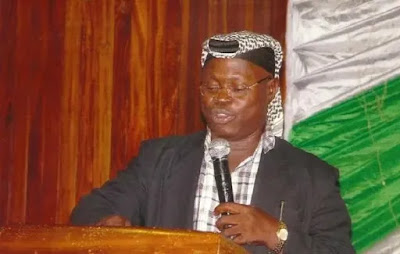 An Islamic human rights organization, the Muslim Rights Concern (MURIC), has rejected the examination timetable recently released by the West African Examinations Council (WAEC) for the conduct of the 2020 West African Secondary School Certificate Examinations (WASSCE).
WAEC scheduled the examinations to begin on Tuesday, August 11 but MURIC said the timetable is exclusive, sectional, parochial, insensitive, and provocative because it clashes with the period of Friday Jumu’ah prayers.
The group further called the schedule an invitation to anarchy, designed to cause pain to Muslim candidates.
The group stated its position in a press statement issued on Monday by its director and founder, Ishaq Akintola.
The group said, “WAEC has again fixed some of its subjects for the period of the Muslim Friday Jumu‘ah prayer in its examination which begins next week Tuesday 11th August, 2020. These are papers that Muslim candidates are also expected to take. The implications are very serious.
“WAEC is deliberately creating a wedge between young Muslims and the mosque. WAEC is making it impossible for Muslim youth to worship. The examination body is encroaching upon Allah-given fundamental rights of Muslim candidates to access freedom of religion as guaranteed by Section 38 (i) & (ii) of the Constitution of the Federal Republic of Nigeria. At best, the examination body is reducing the chances of good performance among Muslim candidates.
“A quick glance at the timetable recently released by WAEC shows that there are at least three clashes between examination periods and Muslim prayers on Fridays: Management-in-Living (2 pm, Friday 14th August, 2020); Literature-in-English (2 pm, Friday 21st August); Health Science (1.30 pm, Friday, 4th September).
“This timetable is exclusive, sectional, parochial, insensitive and provocative. It is an invitation to anarchy. It is designed to cause pain to Muslim candidates. It is therefore the handiwork of sadists and anarchists. It smirks of an anti-Muslim machinery oiled by the passion for hate and injustice.
“This is in spite of efforts made by us to guard against this kind of clash. It will be recalled that MURIC issued a proactive press statement on Tuesday 23rd June, 2020 under the caption ‘Consider the Friday Question in Your Timetable: MURIC Tells WAEC’. This press release was expected to remind WAEC of the need to avoid the present controversy. But WAEC ignored it.
“The examination body cannot claim ignorance of this reminder because it was well published by the media.
“We are perturbed by WAEC’s recalcitrance. The fact that the examination body ignored the above advice shows that it deliberately targets Muslims for persecution. It inflicts unbearable psychological trauma on young Muslim candidates. It is unacceptable. This has to stop.
“There is also enough evidence that this is not the first time WAEC will fix examinations during the Muslim prayer period on Friday. MURIC’s struggle with WAEC over the Friday question is of great antiquity. Unfortunately WAEC does not appear ready to learn from history.
“We will cite at least two past clashes and our interface with the examination body. The timetable clashed with Jumu‘ah service in 2015 and MURIC cried out thereby forcing the examination authority to adjust its timetable. Again in 2018 WAEC reenacted the same scenario. MURIC kicked again and WAEC adjusted its timetable
“It was due to this constant occurrence that we took a proactive step two months ago by cautioning WAEC not to allow its timetable to clash with the Jumu‘ah period this year but the leopard refused to change its skin. Is WAEC deaf? How can a public institution be so insensitive? What have the Muslims done to deserve being treated like blacks in apartheid South Africa?
“We wonder why it should be so difficult for WAEC to leave out three hours only (from 12 noon to 3 pm) on Fridays in its examination timetable to allow Muslims to worship. Muslim candidates need three hours because the prayer usually starts around 1 pm. They need at least one hour to get to the mosque, one hour for the service inside the mosque and another one hour to return to the examination hall.
“Muslims everywhere in the world do not joke with the Friday Jumu‘ah prayer. This special weekly prayer has divine and scriptural basis in Qur’an 62:9-11 and any attempt to circumspect it by any means constitutes a challenge to divine authority. Justice also demands that the Muslim prayer period be respected by all, especially by WAEC because the Christian Sunday remains sacrosanct. Perhaps WAEC examinations should be held on Sunday morning if it will not respect the Muslim prayer period.
“What right does WAEC have to force Muslim candidates to write examination during Friday prayer time when the examination body does not fix its examinations on Sunday to disturb Christian worship? Is WAEC deliberately destabilizing Muslim candidates? How can a Muslim candidate be in the right frame of mind to sit for an examination slated for 2 pm on a Friday when he must be in the mosque from 1 pm to 2.30 pm? What is WAEC’s gameplan? Is WAEC’s timetable planned by double agents?
“MURIC calls the attention of the Federal Government and the Ministry of Education to WAEC’s excesses. Muslim candidates should not be blamed if they refuse to write examination under duress. Any examination that infringes upon freedom of religion is ultra vires, unlawful, illegal, illegitimate and unconstitutional. Candidates for such examinations acting alone or in conjunction with their parents have every right to use every lawful means to stop the examination.“WAEC is therefore invited to take notice of impending action by Muslim candidates unless it adjusts its timetable to accommodate Muslim Jumu‘ah service during the coming examinations. Muslim candidates must be given three hours every Friday. This is non-negotiable. Nigerian Muslims will liberate themselves from slavery, serfdom and religious apartheid if government is lackadaisical. The only thing MURIC opposes is violence.
“Our message to WAEC is very clear and simple: ‘We warned you early enough but you decided to dare Nigerian Muslims with your satanic timetable. We are returning it ‘back to sender’. Adjust your timetable and stop provoking Muslims forthwith. Let the Muslims go.”