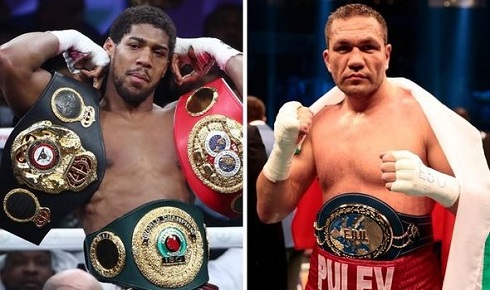 Anthony Joshua will fight Kubrat Pulev in December, according to promoter Eddie Hearn.
The WBA, WBO and IBF heavyweight king had been due to fight Pulev in June with Hearn now keen to delay the fight for a sufficient amount of time to hopefully allow fans to attend.
"We know AJ's only going to fight once this year, so we want to give ourselves the best opportunity to bring in a crowd, and that would obviously be the later the better," Hearn told ESPN.
"But it's still not a gimme at all. There's still a very strong chance that AJ will have to fight behind closed doors."
"Bearing in mind he's only going to fight once this year, I just feel as we might as well give ourselves every chance to have a crowd and that will be the first weekend of December."
Hearn also confirmed The O2 Arena in London is now the preferred venue for the fight, rather than the Tottenham Hotspur Stadium which was originally scheduled to host the bout.
"Their regulations comply with the government, so at the moment they're closed," Hearn added. "So they would need to open up. We'd need to get an understanding from the government what is allowed in arenas.
"Are you going to open at 50 percent [capacity]? Are you going to open up 100 percent? There's a lot of work that has to go into that with the government and the O2."
Joshua's rival Tyson Fury, who holds the WBC heavyweight belt, faces a rematch with Deontay Wilder also in December, with the plan for the British duo to then have a superfight for all the titles.