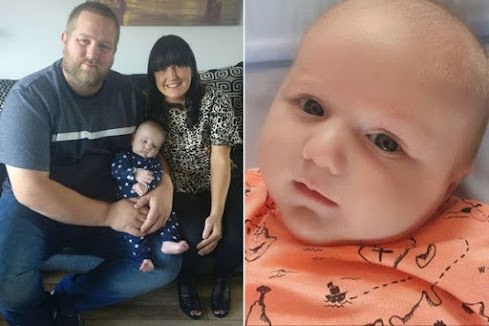 A mum has been left heartbroken after her baby died in the womb from a rare condition that could have killed her too.

Laura McLeish, 31, from Bishopton in Renfrewshire, Scotland, was eight months pregnant when she delivered her baby stillborn.

A few days beforehand she had noticed a change in Gabriel's movements.

Laura suffered heartburn and what she believed were contractions.

But medics discovered she had been suffering from Acute Fatty Liver Disease (AFLD), which occurs in about one in 20,000 pregnancies, reports the Daily Record.

Tragically, Gabriel was stillborn on June 17, leaving Laura and her husband Jonathan, 35, devastated.A consultant at the Royal Alexandra Hospital (RAH) in Paisley told  the couple that 15 to 20 years ago both mother and baby would have been unlikely to survive.

Laura said: "Through both my pregnancies I had a lot of morning sickness and it dragged on.

"The week Gabriel was born I was quite sick with a lot of heartburn and indigestion and then it started to get really uncomfortable.

"I phoned the doctor and they prescribed some medication to try to deal with the heartburn but I wasn't getting any relief.

"Three hours later I realised the cramps I was feeling were contractions so went up to the hospital around 1.30am in the morning.

"Then labour picked up really quickly after that and I was getting sicker and sicker.

"When I went into the hospital, my mum wasn't allowed in because of Covid so I was on my own when they told me his heart had stopped beating.

"I had a chat with the midwife and she thought he passed away late on the Tuesday because I felt a difference.

"He wasn't kicking and I could feel his swooshing around. I thought he had turned, head down for delivery but they said that is what happens when they pass away.

"You will feel them floating around but I didn't realise he had gone.

"Then they allowed my husband to come."

In the next few hours her own condition deteriorated and her liver and kidneys started to fail and it was feared she might require transplant surgery.

Laura said: "Only one midwife had ever seen it before at the hospital so my care was directed by specialists in Edinburgh.

"The consultant said around 15 to 20 years ago I would have been a gonner.

"There was talk of dialysis and organ transplants if they weren't able to stabilise me.

"As things are, I was able to return to normal so I'm very lucky."

Laura's last scan was on May 22, when the pregnancy was said to be progressing well.

She said her other son, Jude, aged one, has been a 'ray of sunshine' in the wake of the tragedy - and that in memorial pictures Gabriel looked like he was sleeping.

Laura said: "He was absolutely perfect. I'm sad now that Johnny wasn't allowed in due to Covid restrictions."

Jonathan's daughter, Hollie, aged eight, was also affected by the tragedy and the family created a 'memory box' to help her remember her baby brother.

And the couple, from Bishopton, raised £7,000 for baby loss charity SiMBA (Simpson's Memory Box Appeal) to help create a second family room at the hospital.

Laura said: "Our wee boy Jude has been a ray of sunshine so we have to keep going for him. He makes us laugh every day.

"I don't know what we would do without him.

"When Gabriel was delivered he was not long dead so he does just look like a little sleeping baby in the pictures.

Jonathan, who works for a technology firm, added: "The fact that SiMBA had an ongoing project to fund another family room at the RAH just seemed perfect as it was a way of thanking them while also recognising the staff who dealt with us with compassion and dignity throughout the whole experience."