Audi Retracts 'provocative' Advert After A Torrent Of Complaints 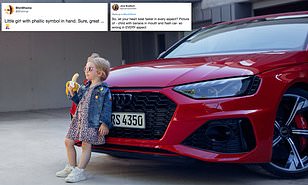 Audi has retracted an advert that showed a young girl leaning against the grille of an RS4 while eating a banana following a torrent of complaints.
The German manufacturer posted the controversial photo to Twitter alongside a caption which read: 'Lets your heart beat faster – in every aspect. #AudiRS4.'
But it has since issued an apology for its 'insensitive' campaign after dozens of social media users took issue with the 'provocative' connotations of the imagery.(Wapbaze_Copyright)

The advert showed a young girl wearing a leopard-print dress, denim jacket and sunglasses as she clutched a banana in her right hand.
She stood leaning against the grille of the car with her head at a similar height as the bonnet.
And the new campaign was quickly met with backlash from social media users.
One, Jane Bradford, commented on the image: 'So, let your heart beat faster in every aspect? Picture of - child with banana in mouth and flash car- so wrong in EVERY aspect.' 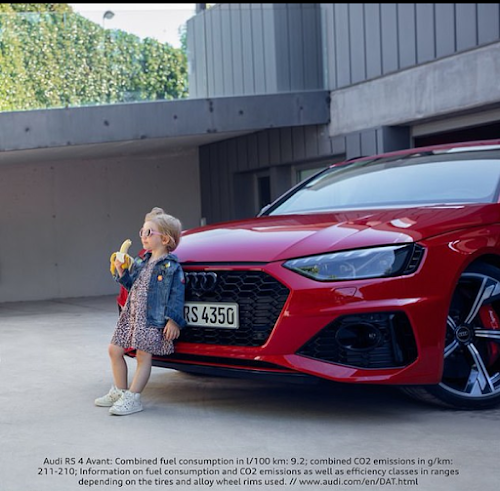 Another, [email protected], added: 'Little girl with phallic symbol in hand. Sure, great...'
A third, DjBeeTee, wrote: 'I don't get 3 things together: 1. Sports cars stand for potency. 2. Why does a little girl in a short big cat dress (symbol for eroticism) stand in front of such a potency substitute and 3. Why does she have a banana (phallus symbol) in her hand?'

Audi has since issued a lengthy apology and admitted the campaign imagery was 'a mistake'.
It said: 'We hear you and let's get this straight: We care for children. The Audi RS 4 is a family car with more than thirty driver assistance systems including an emergency break system.
'That's why we showcased it with various family members for the campaign.
'We hoped we could convey these messages, showing that even for the weakest traffic participants it is possible to relaxingly lean on the RS technology. 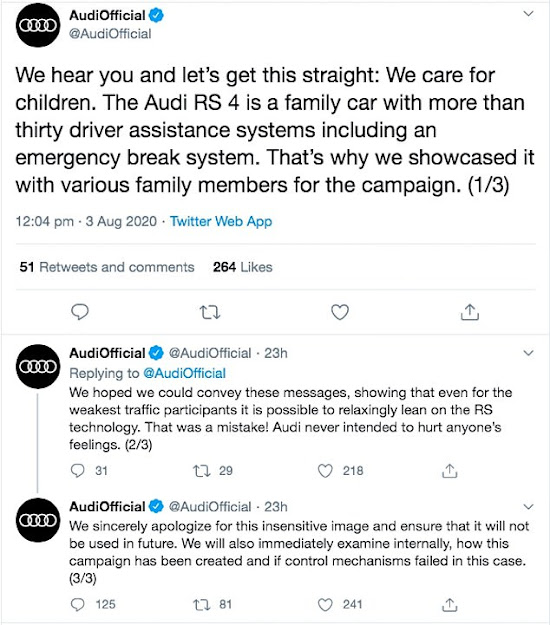 'That was a mistake! Audi never intended to hurt anyone's feelings.
'We sincerely apologize for this insensitive image and ensure that it will not be used in future. We will also immediately examine internally, how this campaign has been created and if control mechanisms failed in this case.'