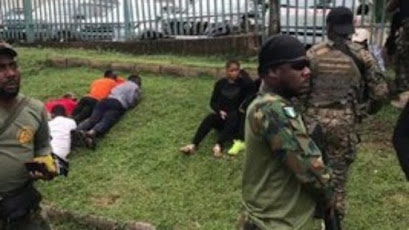 The National Association of Nigerian Students, South-West Zone, has given the Department of State Services till Monday to release detained #RevolutionNow protesters.The students condemned the arrest and brutalisation of the peaceful protesters in Osun, Lagos, Ogun, Abuja and demanded their release. NANS, in a statement today, vowed to stage a demonstration if the demand was not met.The statement was signed by the NANS Zone D Coordinator, Kowe Amos; Secretary-General, Giwa Temitope; and Public Relations Officer, Kazeem Israel.“We find it disturbing that despite the fact that several international protocols guarantee human rights to protest, successive governments in Nigeria have not done enough in the aspect of respect for these rights.“In Nigeria, dissent is criminalised. The ruling class aims to assume the position of the all-mighty; they do not want to be questioned,” NANS said.According to the students’ body, the manner the affairs of the country is being managed is heart-wrenching.It added, “The association having studied the demands of the protesters make bold to assert that they are legitimate, many of which we have also in our capacity as an association raised in a series of interventions since we came on board last year.“Nigerians, especially in the North, are being killed like games by rising insurgency. Rate of poverty, hopelessness and unemployment is alarming. Education and health have been completely abandoned.“Corruption has taken over the entire administration, with rising foreign debt profile capable of compromising the nation’s sovereignty. Respect for democratic ideals of freedom, human dignity, rights and rule of law has been thrown to the winds. The country has been subjected to the whims of jackboot absolutism.“These are legitimate issues raised by the #RevolutionNow protesters. But, the posture of the Nigerian government towards issues has shown that they would rather empower/embrace sycophancy than agree with those with dissent because they are not ready to be held accountable which is why there is always a clampdown on protests.“It is to this end that we demand that the government unconditionally frees the detained protesters.“We warn that the leadership of the zone would be forced to mobilise students down to the barricades should the government fail to release the protesters at the latest Monday,” the statement concluded.The group also lamented the increase in the pump price of fuel and the absence of palliatives due to the COVID-19 pandemic, wondering where the billions of donations and the recovered Abacha loot went to.