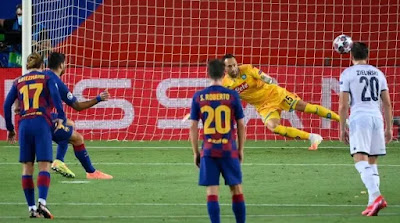 Barcelona have reached the quarter-finals of the Champions League after thrashing Napoli 3-1 to qualify on 4-2 aggregate.The first leg in Napoli had ended 1-1.Clement Lenglet scored Barcelona’s first goal on 10 minutes after a well-executed corner kick. He rose highest and planted a powerful header beyond the goalkeeper, inside the left post.Lionel Messi made it 2-0 for Barcelona, as he finished his beautiful individual effort with a superb strike from inside the box.On 30th minute, Ivan Rakitic put a cross into the box and found Messi, who latched on to it and struck the ball into the top right corner, but after VAR review, it was disqualified.Luis Suarez made it 3-0 for Barcelona, through the penalty spot after sending an unstoppable penalty past David Ospina into right side of the goal.Lorenzo Insigne, reduced the tally for Napoli, through the penalty spot. He made no mistake from the penalty spot after waiting for Marc-Andre ter Stegen to move before slotting the ball low into the middle of the goal.