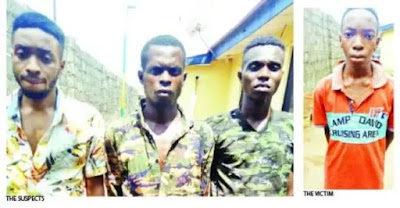 Two brothers Lucky Osuji 25 and Reward Osuji 17 from Emekuku Owerri North local government area of Imo State, conspired with members of Black Axe Fraternity, a cult group and kidnapped their younger brother, Confidence, who is 14 years old.Along with their collaborators, the brothers threatened to kill Confidence for rituals if their grandfather failed to give them N7million.The grandfather, Chief Chukwuna Osuji, village Prime Minister worried by the threat, was said to have reported the matter promptly to the Police.The police advised him not to pay any money.However, the old man went ahead, negotiated with the kidnappers. He got the ransom reduced to N1millon.According to the police, Chief Osuji dropped the cash at the criminals hideout at Upe, Ngor Okpala.After that, the kidnapped grandson was released.The Commissioner of Police, Imo State, Isaac Akimmoyede, said after Osuji reported the kidnapping, he mobilised the Anti-Kidnapping Squad Commander,Linus Nwaiwu and his team to action.After days of detailed observation and investigation, they swooped on the location of the kidnappers, in Upe in Ngor Okpala Local Government Area of Imo State.Bernard Ugo, one of the criminals was arrested.On interrogation, he confessed that the two brothers, Lucky and Reward were accomplices,The police arrested the brothers.Further investigation revealed more gang members were involved in the crime.Two days later Okechukwu Nwachuku, 22 whose home was used as the spot for the ransom collection was arrested.His arrest led to the arrest of the remaining members of the gang, Apollo Jeffrey 22, Iregbu Akachuku 30, the Police Commissioner said.Lucky Osuji was said to be a graduate of a tertiary institution waiting for his call up letter for the National Youth Service Corps NYSC.His brother, who was arrested with him, had finished his Senior Secondary School Programme and he was awaiting admission into the University.Lucky, while giving his account of his role said his father, Elvis Osuji and mother, Blessing Osuji, both died in 2009, leaving him and brothers as orphans.Since his parents died, he and his siblings have been living with his grandparents.According to him, he was the mastermind of the kidnapping, an act which he confessed he had planned since 2017.He needed his immediate younger brother’s consent to join him in the plan which the brother agreed.He then contracted 5 members of his gang to execute the plan.On June 10,2020, he gave the victim N200 to wait for them at the junction saying they were going out to buy something which was a lie as he already organized his friends to kidnap his brother.Before the brother got to the junction, the gang members kidnapped him.He said that when the matter was reported to their grandfather, Lucky feigned ignorance and helped his grandfather to look for his brother.The suspect said when his gang members asked his grandpa to pay N7million, the grandpa pleaded with them and paid N1million out of which he received N450,000He added that his grandfather was good to them, but their desire to open a barbing salon was the reason they kidnapped their brother in order to raise money for the business and begged their grandfather to forgive them.