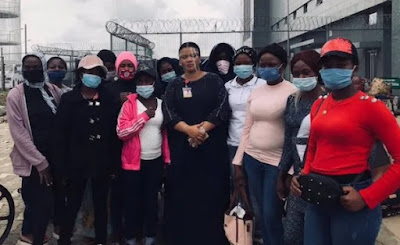 Chairman House of Representatives Committee on Diaspora Affairs, Tolulope Akande-Sadipe said 80,000 Nigerian ladies are being held as s.e.x slaves, and forced labour in Mali, Lebanon, Saudi Arabia UAE and Oman.And she blamed Dr Chris Ngige’s Ministry of Labour for being complicit in the way the girls were trafficked to the countries.Akande-Sadipe, who is representing Oluyole Federal Constituency in the House of Representatives, made the revelation on Monday, while speaking with journalists in Abuja.She called on the Federal Government to urgently put a stop to the exploitation of Nigerians abroad.She pointed out that the Federal Ministry of Labour and Employment, under the supervision of Dr. Chris Ngige has violated the law and has continued to issue International Recruiters Licenses to Agents, despite Federal Government’s 2017 moratorium.She lamented that Nigeria has no Bilateral Labour Agreement with any nation and the execution of the Standing Operating Procedure (SOP) has been lingering.“Federal Government placed a moratorium on issuance of International Recruiters License in September 2017 and yet the Ministry of Labour and Productivity as at January 2020 was still issuing international recruiters licenses”.She added that many Nations in the Middle East and even within Africa were violating the rights of our citizens under the guise of domestic servitude.“The question we must ask is How they got there? We have called out Immigration but then again the Ministry of Labour is also complicit”, she said.“These agents collect $1000 plus the first 3 to 6 months salaries of the girls and abandon them to their plight in the foreign nations. The trafficked girls unfortunately are ignorant of the ills they may face abroad and are lured by the agents, because they seek a better life”.Akande-Sadipe also revealed that these agents lie to the ladies about the jobs waiting for them in foreign lands, urging Nigerians to move away from the perception that the girls left this shores to prostitute.