Wild Bear That Sniffed Woman's Hair Is Caught And Castrated 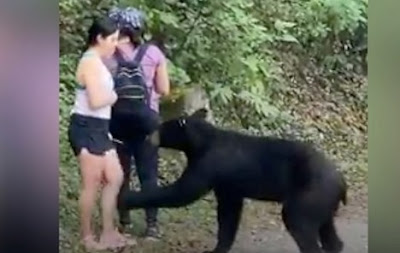 There is outrage in Mexico after a black bear seen on video approaching a visitor in a nature park and sniffing her hair was caught and castrated.Some people are questioning plans to move the animal to a different state.But experts say the move is necessary because it had become accustomed to being fed by humans in the ecological park where it lived.They said the footage showed the consequences of feeding wild animals for the sake of a selfie. The animal, a juvenile male black bear weighing 96kg (212lb), was caught because it was considered to pose a risk to visitors of Chipinque Ecological Park. Video showed it getting very close to a young woman who was taking a selfie with the bear last month. Officials said there had been other close encounters between humans and the same bear in the park and in residential areas nearby.