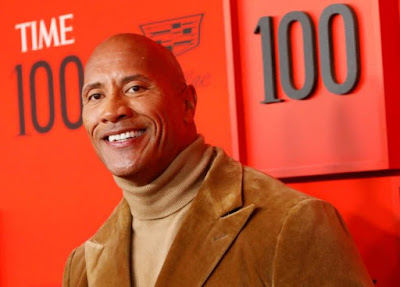 American-Canadian actor Dwayne “the Rock” Johnson has been named the highest-paid male actor for the second year in a row, according to Forbes.According to the list, which Forbes released yesterday, this year’s ten top-earning actors collected a combined $545.5 million thanks to lucrative deals with streaming sites. The list is between all projects from June 1, 2019, to June 1, 2020.Dwayne JohnsonEarnings: $87.5 millionDwayne Johnson tops the list for the second yrar in a row with $87.5 million, collecting $23.5 million for his role as an art-thief-chasing Interpol agent in the upcoming Netflix original film Red Notice. The former wrestler is still selling his successful Under Armour line, complete with shoes, clothes and headphones. Johnson plans to make his DC superhero debut.Ryan ReynoldsEarnings: $71.5 millionAccording to Forbes, Reynolds made more than $20 million for each of his recent Netflix films, “Six Underground” and “Red Notice.” In July, Netflix announced it was shelling out for a third Reynolds film, which will undoubtedly mean another eight-figure payday.Mark WahlbergEarnings: $58 millionWahlberg’s action comedy “Spenser Confidential” became Netflix’s third-most-watched original film after it debuted in March. Wahlberg has also made millions producing the series “McMillions” and “Wahl Street.”Ben AffleckEarnings: $55 millionAffleck returned to the screen following a brief hiatus starring in the film “The Way Bacck”. He was also in a Netflix film, “The Last Thing He Wanted.”Vin DieselEarnings: $54 millionDiesel got the bulk of his earning this year by producing the animated Netflix series “Fast & Furious Spy Racers”. His next film, “F9,” was moved to next year.Akshay KumarEarnings: $48.5 millionKumar is the only Bollywood star to make the list. He makes most of his earnings from endorsement deals and is also starring in an Amazon Prime series called “The End.” He also made last year’s list.Lin-Manuel MirandaEarnings: $45.5 millionMiranda is making the list for the first time thanks to Disney buying the rights to his Broadway production of “Hamilton,” for $75 million. “Hamilton” is now streaming on Disney Plus. He is expected to make another big payday next year when the film adaptation of his Broadway show “In the Heights” is out.Will SmithEarnings: $44.5 millionWill Smith is no stranger to this Forbes ranking. Smith is earning big checks for lead parts, such as his upcoming role in King Richard, in which he portrays Richard Williams, father of tennis greats Serena and Venus. He also earns from side projects including a Snapchat series and his popular Instagram account.Adam SandlerEarnings: $41 millionSandler has been successful on Netflix since signing a four-film deal for $250 million in 2014, Forbes reports. Sandler earned $31 million from his Netflix deal alone last year. His film “Murder Mystery” was popular on the streamer this year. Forbes reports that Netflix users have streamed more than two billion hours of Sandler’s content.Jackie ChanEarnings: $40 millionThe 66-year-old Honk Kong film legend made five films last year. Along with his film income, he makes millions from endorsement and licensing deals.