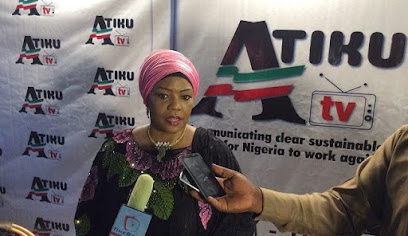 Former Vice President, Atiku Abubakar, has launched an online television that will henceforth propagate his social and political activities.The event took place at the Five Star Bristol Palace Hotel, Kano, where a video clip showed the former vice president speaking on his vision and aspiration.Atiku was represented at the occasion by one of his sons and political allies, particularly PDP members.The Atiku TV was launched by Hajiya Baraka Sani, a former Kano State Commissioner for Agriculture and Special Adviser to former president Goodluck Jonathan.Baraka Sani said the ‘Atiku TV’ is a new approach that will change Atiku’s mode of reaching out to people from analogue to digital, henceforth.She explained that the contents (about Atiku) for the television will be developed in YouTubes and circulated on the cyberspace, via WhatsApp, Facebook, Twitter, Instagram and other platforms of the new media.