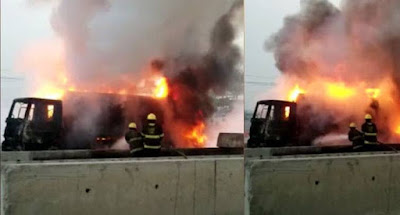 Tragedy struck on Owerri-Onitsha Road in Imo State on Friday as a petrol-laden tanker exploded and killed two persons.The incident, which happened at the Irete area by Forte Oil Filling Station, caused panic in the area.The cause of the explosion was yet to be ascertained but punch correspondent, who visited the scene on Friday afternoon, learnt that the driver of the tanker and a woman, said to be coming back from a nearby market, died in the explosion while many others were injured.An eye witness, Kingsley Eke, told punch correspondent that for the timely intervention of the men of the state fire service, the explosion would have wrecked more havoc.He said, “The incident would have been more disastrous but for the prompt arrival of firefighters. It is unfortunate that we lost two persons in the fire – the driver and a woman. Others have been rushed to a hospital.”When contacted, the state Police Public Relations Officer, Orlando Ikeokwu, confirmed the incident.Ikeokwu, however, said he could only confirm one death as of the time of filing this report.