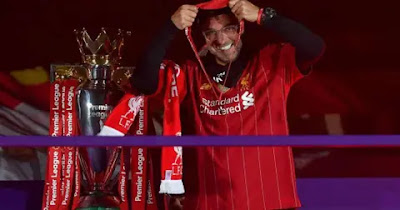 Liverpool boss Jurgen Klopp has been named Premier League Manager of the Season for 2019-20.The Reds won their first top-flight title in 30 years, finishing on a club-record 99 points, 18 clear of previous champions Manchester City.Klopp’s side went unbeaten in their first 27 games, winning 26, and set a record for earliest title win by sealing their triumph with seven rounds of matches remaining.Klopp, who was named League Managers Association Manager of the Year last month, won the Premier League prize ahead of fellow nominees Frank Lampard, Brendan Rodgers and Chris Wilder.Liverpool right-back Trent Alexander-Arnold claimed the Young Player of the Season prize and is also up for the Player of the Season accolade, along with team-mates Jordan Henderson and Sadio Mane.