Man Accuses Bauchi DPO Of Breaking His Legs, Torturing Two Of His Friends To Death Over Chicken 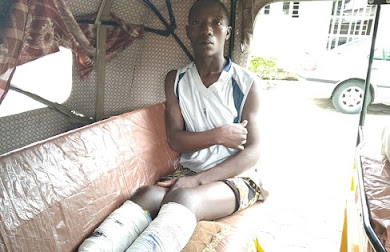 Abdulwahab Bello, a-30-year-old man, has alleged that a Divisional Police Officer (DPO) of Twon Township Police Station, whose name was not given, tortured two of his friends to death with a pistol while the said officer also broke two of his legs.While addressing pressmen at the NUJ Secretariat with his father and a human rights group, PIDI-NIGERIA, Bello was supported with a pillow on a tricycle to narrate his ordeal. He said that the incident occurred some days ago when they were arrested by the police over theft of chicken belonging to a retired police officer.The victim explained that two of his friends – Ibrahim Kapala and Ibrahim Babangida – asked of where the chickens could be sold while he told them to go to Muda Lawal Market. “I didn’t know that they were stolen chickens,” he added. 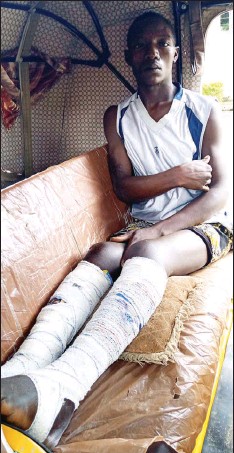 He said shortly after, he was arrested with his two friends and taken to the police station where the buyer of the chicken was also arrested. The matter was settled and they were asked to pay for the stolen chicken.“They said we should pay the money for the two chicken and my father brought the N4,000 to them. The DPO told my father to go that they will release me. We came out and he asked us to go to the back of the police station, which we did. He asked us to lie on the ground with our stomachs and then ordered that the first person who died, Ibrahim Kapala, should be tied. “When the policemen tied him, the DPO went into his office and brought out a pistol. He started hitting Ibrahim with it and broke his right leg and then broke his left leg. Some of the policemen there didn’t say a word.“While he was beating him, he was saying that ‘today, stealing of chicken has ended’ and he continued beating him until he fainted. After he fainted, he started hitting him with his shoe even though he was motionless. “The DPO said to him, ‘are you dead? It is even better that you have died’ and he ordered that the second person be brought to him. Immediately he was brought, he descended on him also and broke his leg and then he took that piston and started hitting him with it on his chest and his back, he too fainted.” Abdulwahab said that while his friends were being beaten, he knew the DPO would do the same thing to him and he had concluded that he was dead.He said: “My thought was that they would kill me too because my friend was lying down there motionless and he was telling him to die. So, I just gave up and was waiting for my time.” He denied allegations by the police that they were serial thieves who had been terrorising residents of the area. Father of the victim, Alhaji Bello Muhktar, who spoke with journalists, accused the DPO of taking the laws into his hands. He, therefore, called on the Inspector General of Police, Mohammed Adamu, to investigate the matter and ensure that the DPO who allegedly murdered the two young men and inflicted serious life-threatening injuries on his son be brought to book.“For the police to do this kind of thing is terrible. When a policeman takes the law into his hands and kills your son, tomorrow, if you see him, what would you do to him? You too might take the laws into your hands. Just as he killed your son, you will also want to do the same to him. That means we are descending into a banana republic. “Because of this, I am pleading with the Inspector General of Police to take action on this matter and ensure justice is done. What I have spent so far in treating him is more than N50,000. This has not been easy at all and one of his sisters has been helpful in footing his medical bills.”