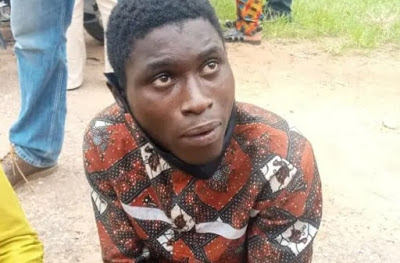 The Oyo State Police Command has commenced manhunt to re-arrest Sunday Shodipo, a suspected killer who escaped from custody.CP. Nwachukwu Enwonwu gave the pledge on Monday in his office while receiving a delegation of Nigeria Union of Journalists (NUJ), Oyo State Council.Shodipo and others were arrested in connection with killings at Akinyele area of Oyo State.Enwonwu described the development as very sad, saying two officers had been arrested in connection with the matter and are currently undergoing orderly room trial.He pledged that the command would do everything to re-arrest the suspect and ensure the state was crime-free.

“We have deployed massively, we have mobilised people both Kabiyesis, hunters, vigilantes and our policemen in covert operations. They have been combing the whole area and beyond for this man.

“And finally too, we have published him as a wanted person, so that anybody that sees him should please apprehend him and draw our attention to it.

“We have also pleaded with the public not to take laws into their hands. In case they see him, let them not mob him and send him to untimely grave by way of jungle justice.

“They should handover, so that the man will continue from where he stopped to tell the court and the public. He had already confessed during the last press briefing,” he said.

Enwonwu said that proceedings on the policemen involved has started on Monday morning, assuring the press and the general public that there would be no cover up.

The commissioner of police urged the public not to lose faith in the police, adding they are already enjoying their partnership, cooperation and collaboration.

Enwonwu said that in spite of the attack on three of their officers, no shot nor teargas was fired at the angry protesters based on his instruction, saying such could have snowballed into a chaotic situation.

“We were taken aback, we were shocked that police custody should be the safest place for any suspect undergoing interrogation to be kept in a safe haven.

“What we are hearing today is so sad that we feel we are going to raise a statement to condemn the development.

“But, because of the relationship we have with the new CP, we felt that there is need for us to come around and hear from you what led to the disappearance of Sunday Shodipo,” he said.

He alleged that the suspect had tormented the people of Akinyele area and sent five young vibrant citizens to their early graves, urging the police to ensure the suspect was re-arrest.

Babalola also called on the police to ensure security of lives and properties, while ensuring all those culprits were brought to justice.