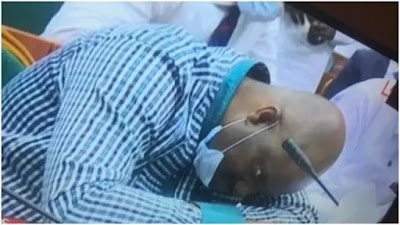 Acting Managing Director/Chief Executive Officer, CEO, Expanded Interim Management Committee, EIMC, Niger Delta Development Commission, NDDC, Prof Kemebradikumo Pondei, Tuesday, opened his heart on the ill-starred incident at the House of Representatives, where he unexpectedly fainted while being questioned by lawmakers, a month ago. Pondei, undoubtedly stressed but back to his feet, in an exclusive interview with Vanguard, disclosed that he had a mysterious and unpredictable health challenge and was stunned people thought he was acting.Speaking on the delay in passing the Commission’s 2019 Budget, he revealed: “A minor typographical error was noticed and we asked for 10 minutes to amend the errors, but the presentation was stepped down. The National Assembly, NASS, has since gone on recess.” I noticed a new bounce in NDDC activity after your last appearance in the House of Representatives, are you back to your feet now, what really happened to you on that day? I had an unexplained, unexpected health challenge. It is ridiculous to think that people believed I was acting. I would not pray for anyone to experience what I went through. I do not run from issues. I have put all that behind me.

Despite the allegations against you and other EIMC members, you seemed not to be perturbed anymore, as you have gone back to work, what is the adrenaline? This is because the accusations/allegations were laughable. From N40 billion missing, the probes now became extra-budgetary spending. After accusing the EIMC of embezzlement of N40 billion, nothing was substantiated. The IMC is then asked to refund monies paid for historical debts owed contractors, service providers and allowances paid to staff.