Naira Marley CANCELS #EndSARSBrutality Protest, Gives Police One Week To See A Big Difference Or Else... 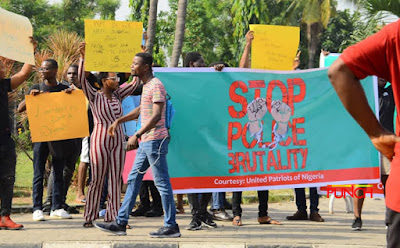 Naira Marley has cancelled his proposed #EndSARSBrutality, #EndPoliceBrutality protest which was slated for today. The singer made the cancellation on twitter -- the medium he used to call for the protest.

This comes after the Minister of Youths and Sports, Sunday Dare tweeted at him appealing that the protest be cancelled.

The Nigerian Police Force also tweeted at the singer, saying the IGP has heard the voice of Nigerian youths LOUDLY AND CLEARLY and the police force is already working on changes.

''We won’t be protesting anymore because there’s a lot of changes being made right now. As a Marlian we will give them a week to see the changes and if there’s no changes we will start a mass protest. #togetherwecan'', Naira Marley tweeted this morning, threatening there will be a protest after one week, if the brutality continues.

While also asking his fans to join him live on Instagram with the police, he wrote;

''Marlian nation feel free to join the live and ask any question you want. #togetherWeCan''

''@officialnairam1 The Inspector General of Police wishes to inform Nigerian youths that their voices and complaints on the issues of unprofessional conducts by some SARS operatives have been heared very loudly and clearly.''