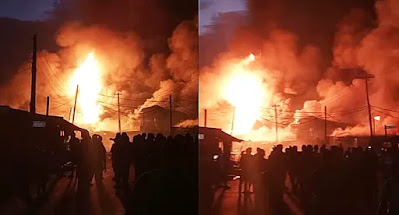 Eight persons have been confirmed dead following a gas plant explosion that occurred in the Ipaja area of Lagos on Thursday.

While further assessment of the area is still ongoing, a tweet by the emergency response agency, disclosed that an initial disaster assessment revealed that eight fatalities have been identified.


25 houses (mostly bungalows), 16 lock-up shops and a Primary School were also affected by the fire.

An official of the Nigerian Emergency Management Agency (NEMA), who spoke to Channels Television at the scene said a generator triggered the fire.

The incident is coming barely two weeks after a tanker explosion occurred in the iju, Ajuwon area of the state.