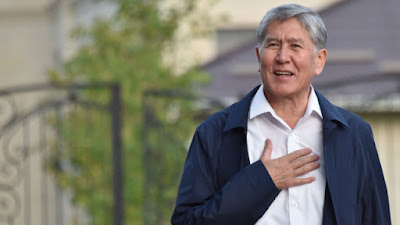 Kyrgyzstan’s security service said Saturday that it had rearrested former president Almazbek Atambayev after supporters freed him from jail during post-election protests.

The arrest came as the incumbent president Sooronbay Jeenbekov reasserted control following unrest after a disputed parliamentary election in which several prominent politicians were freed.

The state national security committee said in a statement that Atambayev had been arrested on suspicion of organising mass disorder, along with one of his bodyguards and another accomplice.

The committee was currently “identifying and arresting other accomplices of this crime”, it said.

President Jeenbekov on Friday ordered a state of emergency in the country’s capital Bishkek, as shots were fired and at least five people injured in clashes between supporters of groups competing to form a government.

The 61-year-old president said on Friday he was “ready to resign”, but only after law and order had been restored — a pledge some critics described as a tactical manoeuvre.

The instability came after supporters of Jeenbekov won parliamentary elections on Sunday that the opposition and monitors said had been marred by vote-buying.

Although the result was subsequently annulled by the electoral authorities, this failed to quell unrest.

After a protest rally led by losing parties descended into violence, Atambayev was one of several politicians released by supporters. A former prime minister and a nationalist ex-lawmaker were also freed from jail.

Kyrgyzstan, an impoverished ally of Russia that looks to next-door China for trade and investment, has seen two presidents overthrown by street protests since independence from the Soviet Union.