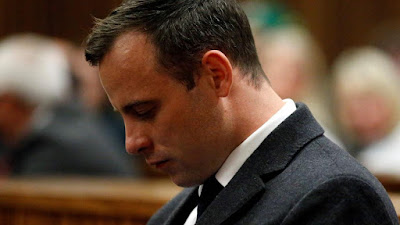 Oscar Pistorius has reportedly said he wishes for forgiveness from the family of his victim Reeva Steenkamp.

The killer paralympian athlete, who was jailed for 15 years for shooting girlfriend Reeva dead, told a friend he is desperate for her family to accept his apology.

He reportedly said 'I want to tell them I'm sorry'.

Bill Schroder, 76, claimed Pistorius had turned to God and is more concerned about getting forgiveness than parole.

Bill has visited him four times in jail.

He told The Sun on Sunday : "What he really, really wants is forgiveness.

"I said to him that if he had killed my daughter I doubt I would forgive him.

"He is more concerned about forgiveness than actually getting out on parole. In fact, he has a real fear about getting parole as he knows they’ll be a backlash.”

Mr Schroder said Pistorius continues to maintain the killing was an accident.

Pistorius is currently being held at a prison north of Pretoria, South Africa, which caters specifically for inmates that suffer from disabilities.

Pistorius was initially imprisoned for six years after being found guilty on appeal of murdering Reeva on Valentine's Day 2013 in a case that attracted worldwide interest.

He claimed she had gone to the bathroom and he had woken up believing she was a burglar when he opened fire.