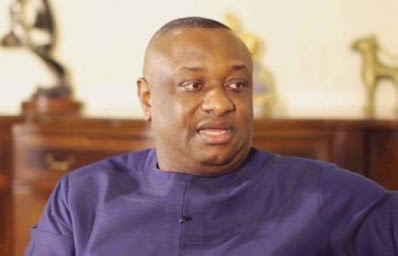 The Minister of State for Labour and Employment, Festus Keyamo, SAN, says the ongoing #EndSARS protest rocking the country is becoming a mob action.
According to him, some criminal elements have mixed with genuine protesters to unleash terror on citizens and members of the Nigeria Police Force.
The minister said the regime of President Muhammadu Buhari, was committed to improved welfare for members of the police, noting that the President increased salaries of policemen in the country two years ago.
Keyamo was reacting to one of the demands of #EndSARS protesters who want better remuneration for police officers nationwide.
The protesters want the police authorities to carry out psychological evaluation and re-training of all disbanded SARS officers before they are redeployed.
They demand the release of all arrested protesters, justice for all deceased victims of police brutality and appropriate compensation for their families.
They also want increased salaries for police officers as well as the establishment of an independent body to oversee the investigation and prosecution of all reports of police misconduct.
Reacting to one of the five-point demands of the protesters on Tuesday, Keyamo, who spoke in a Facebook Live Chat with The Punch, said the Federal Government was not buoyant to increase the salaries of police officer at the moment.
He said, “The President has no powers to come up tomorrow and announce new salaries for policemen. When you do that, you even trigger an industrial crisis because you have different segments of the society, doctors, civil servants, soldiers and others will make fresh demands.
“We just did a minimum wage last year. It was President Buhari that increased the salaries of policemen two years ago. It was after a rigorous exercise, almost 100 per cent increment. Corporals and all that went home all smiling.
“You have to look at the national purse to do that. Right now, we are borrowing and that is why we are freeing up a lot of subsidies.”
He emphasised that the reformation of the Nigeria Police Force is a process that won’t happen in a day.
He said the release of detained protesters is “an event” which the Federal and State governments have done but the other points would take some time. He, therefore, appealed to the protesters to give the government room to make those happen.
According to him, there must be a face to the struggle for proper negotiation between the government and the protesters.
The minister said, “Government cannot address hashtags and when they are addressing that, they don’t know whether they are exhaustive or not. The next day after addressing those hashtags, another party will rise with another demand. Nobody is going to do that.
“There is a babel of voice and right now, there are fifth columnists in the midst of everything. I am sure you have seen some hashtags like #BuhariMustResign. It is a matter of people pushing the frontiers of their demands without revealing from the beginning what they want.
“It is just a moment of emotions and lack of reason. This is mob mentality going on right now. But at some point, some voice of reasons must let people know the fact and fiction.
“Some people know the voice of reason to add at this time but they are scared to let out the voice of reason because they are afraid of the mass of angry listeners will turn out on them. But we shouldn’t, we have a bit more experience than them and we should tell them how it should be done.”
He commiserated with the families of victims killed in the ongoing protests, insisting that some unscrupulous elements have joined the demonstrations to wreak havoc on genuine protesters.
He said, “Some criminals mixed with the protesters, we must always realise that. Criminals at times come out to mix with genuine agitators. They carry weapons and they can hurt innocent Nigerians in the process.
“We need to get footages of these incidents, investigate them thoroughly and whoever is involved whether law enforcement agents, should face the law.
“Peaceful protests must be on both sides – those who are protesting must conduct themselves responsibly, the law enforcement agents must also act with restraint.”