Four #EndSARS Protesters Crushed To Death, Others Injured In Edo 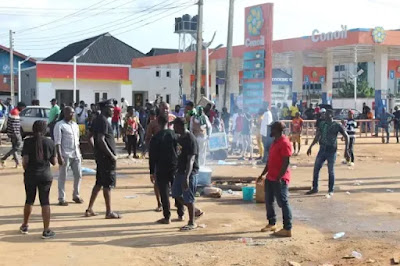 Four persons were reportedly crushed to death in Benin, Edo State in the wee hours of Sunday, when a Sport Utility Vehicle ran into a group of protesters who slept on the road.

Four others who sustained serious injuries were said to have been rushed to the State Specialist Hospital for treatment.

The protesters were said to have set bonfire on the road and slept beside it, when the vehicle ran into them.

According to a report monitored on a local radio station, the incident occurred along 2nd East Circular Road, by Uwa Junction.


The driver of the vehicle was said to have abandoned it at the spot and fled from the scene of the incident.

Effort to get a reaction from the state police command spokesman, SP Chidi Nwabuzor failed, as calls made to his mobile phone went unanswered.

Meanwhile, the entire city seem to be in chaos as protesters set bonfires at various spots.

Also, all entry points into the city are blocked by the protesters, causing untold hardship to travellers who have to connect their various routes through the city.

Intra- city transportation was also halted, causing commuters much agony, as they have to walk long distances to their respective destinations.

The ever busy Benin/Abuja highway was blocked after the by-pass, while Benin/Agbor road was blocked at Police road Junction.

A commuter who was returning to Benin from Abuja told our correspondent that his vehicle remained static at Egba Junction for over three hours.

Other places like Agbor Park, Rammat Park, Okhoro road and Medical Store road junctions were also blocked with bonfires by the protesters.

The protesters who apparently slept on the Ekehuan road, made fires on the road with which they cooked their foods.

One of the protesting youths, Collins Omorogie, said their protest is not only against the Special Anti-Robbery Squad (SARS), but against injustice meted on Nigerians by the government.

“The injustice in the three arms of our government and many more are what we are protesting against today in the strongest term.

“Part of this protest is reformation of our police. There are also government agencies, parastatals that need total reform. But most importantly we are protesting and demanding for a total restructuring of the country.