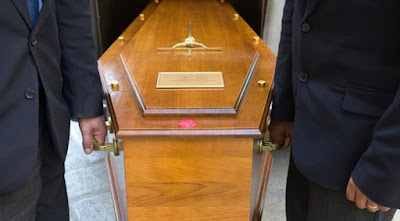 A grieving family who were unable to pay for their young son's burial were "left with his body on the floor" after funeral directors allegedly confiscated the coffin.

They couldn't afford the £120 bill - and the teenager's body was reportedly left in a garage where the wake was taking place, still surrounded by flowers and incense candles.

The funeral only went ahead after mourners took to social media to ask for financial donations towards the burial.

The incident happened in the town of Tehuacan in the Mexican state of Puebla.

Spanish newspapers say when the family couldn't come up with all of the money, the funeral home gatecrashed the wake at their home and took away the coffin - after removing the corpse and putting it on the concrete floor.

The family had managed to hand over about 900 pesos but this was refused by the funeral home which wanted payment in full.

Posting an appeal on twitter, his friends said: "This family needs help to give a healthy burial to the body.

"It should be noted that the family is poor and did not have money to pay for the funeral service."

They asked for money to be left with the family and not at the funeral home and gave their address and phone numbers.

Donations flooded in and they were able to buy a new coffin and allow the funeral to go ahead.

The local council also helped by providing a place in the cemetery free of charge.