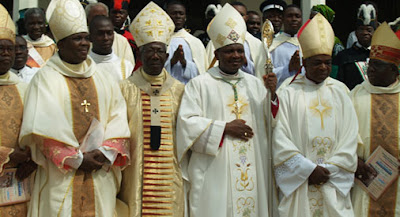 The Catholic Bishops’ Conference of Nigeria (CBCN) has backed the ongoing nationwide protests by Nigerians, especially the youths, who are calling for an end to police brutality and extra-judicial killings in the country.
The CBCN President and Archbishop of Benin-City, Most Rev Augustine Obiora Akubeze, said this in a statement signed by the National Director of Communications, Padre Mike Umoh.
The CBCN President noted that the widespread protest calling for an end to SARS is not only remarkable but commendable, more so that it is being led by the Nigerian youths.
“It is an indication that the youths are tired of suffering from the brutality and injustices perpetrated by SARS operatives and Nigeria Police Force in general. The youths are therefore simply calling for justice not just for themselves, but for the entire nation so that Nigeria can have peace,” Akubeze said.
The Archbishop of Benin-City also said that whereas the Federal Government keeps asking for peace and calm in the face of every crisis, the present agitation shows that the Nigerian youths have run out of patience and are tired of the lip-service paid by the government of the day towards a just and peaceful society.
While reiterating the need for the restructuring of the country, the Archbishop said, “We unequivocally add our voice to those of our youths and that of every well-meaning Nigerian to condemn the excesses and the horrible operations of this Police unit and the bad omen they portend to our democracy.”
Akubeze also called for a complete reform of the Police Force where Officers are paid a just wage and their welfare catered for, as well as their barracks put in order, so that they can have a decent life with their families.
He, therefore, called for the prosecution of all those who embezzled monies due to officers in the past and an effort to ensure that such loots recovered are directed to those whom they were meant for.
He said, “We reiterate that restructuring this country is a desirable path to be towed given the various developments in this nation. The knee jerk reaction of the administration by abolishing the SARS and setting up the Special Weapons and Tactics (SWAT) team portrays either the absence of an understanding of the entire problem or a lack of sincerity to address the problem.
“The Nigerian Government must realise that what the youths, on behalf of Nigerians, clamour for under the code name #EndSARS is a total reform of the entire Police Force and note a change of name; they call for a reform of all our government institutions and a reform of the entire nation. They are asking for a system that will be hard on crimes and criminals in the society within the ambiance of the law, while at the same time treating every human being, citizens and visitors alike, with respect and dignity.”