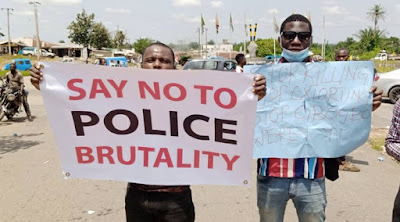 Business activities, vehicular and human movement in Ibadan were on Monday paralysed as the youth continued with the EndSARS protest.
Reports from news correspondents across the city revealed that major roads, including link roads, were blocked as early as 5 a.m.
With the blockade, many road users, who had set out early to beat the protest were caught up in traffic jam, resulting in many workers getting to their offices late.
The youths were seen carrying placards with different anti-SARS inscriptions.
At the Bus-Stop area of Gate, some youths were seen blocking the Oje-Gate road, threatening motorists who dared to clear the road.
At about 10 a.m., scores of youths had already gathered in front of the State Secretariat, Agodi, with the main gates locked by security operatives manning them.
Although the youths allowed vehicles to move freely, they were, however, forcing motorists to shout the #EndSARS slogan.
Meanwhile, major roads at the Orita-Challenge axis of the town were blocked as early as 5 a.m.
Some well-wishers were seen supplying free soft drinks, water and light snacks to protesters.
With the roads blocked, many people, who, for one reason or the other, had to go out decided to trek.
Although shops were locked, a few hawkers were seen carrying out their trade without any form of interruption.
The banks along the Orita-Challenge axis did not open, while those along the New Gbagi area of Ibadan opened.

The situation was similar at the Apata/Omi-Adio end of the town, as protesters marched the road, subjecting both pedestrians and motorists to hardship.
Transport fares across the different routes in the city were hiked by taxi drivers and commercial motorcyclists, otherwise known as Okada, leaving commuters stranded or having to trek.
For instance, the journey from Mokola to Challenge, which usually cost N100, was hiked to N150.
The road blockade affected taxi drivers more than the motorcyclists, who found it easier meandering through the blocked roads.
Due to the protests, some private schools around Mokola axis did not open as some students were seen roaming about the streets.
Meanwhile, some private schools that opened initially have called on parents whose children made it to the school to come pick up their wards, advising them to stay at home on Tuesday.