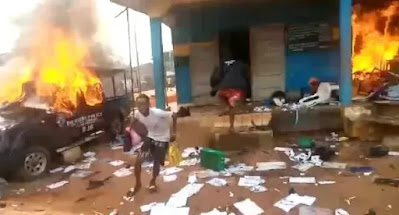 The force in a statement on its Twitter page disclosed that the extent of damage cannot be estimated at the moment, however, they confirmed protesters carted away arms and ammunition from the armory.

The police also disclosed that suspects in custody were freed before certain facilities were set ablaze.

The police also said they have swung into action to bring the situation under control, protect lives of innocent citizens, and prevent further attacks on any other critical infrastructure in the state.

The extent of damage cannot be ascertained at the moment but report indicates that the protesters carted away arms and ammunition from the armoury and freed the suspects in custody before setting some of the facilities ablaze.